The ‘what if’ of the story

One of the joys of sharing a picture book with children is to observe the story playing out in their minds and bodies. There are the glazed dreamy looks, the relaxed toes and fingers. Then the sudden alert positioning of bodies and, most obviously of all, the absolute closeness to the page as children are sucked into the story-world vortex.

The ‘what if’ is what happens when we open up the book and allow it to expand our boundaries. We switch thinking from inside the book to a wider, new world of possibilities. It is a world where each child’s imagination and experience is acknowledged and given a voice. The examination of imaginary possibilities gives permission for children to become part of a living, changing story, with a personal connection to each of their lives. The thinking and wondering acts as a springboard into a new world – which is at the same time a world that is being co-constructed, and therefore ‘owned’ by every child who is involved. It is the ‘what if’ that enables children to continue with the story and become its storytellers.

The story itself began with sparks of imagination – author and illustrator co-created the story through a series of ‘what ifs’, ‘whys’ and ‘hows’.

Quality picture books are those with the capacity to draw in young readers by their easily deciphered presentation of the ‘what if’. It’s an invitation to participate and co-create through the puzzle to solve, the curious happenings, the problems to examine, the alternative viewpoints, the complexity of character or plot and the ‘how?’ ‘why?’ and ‘I wonder?’ of text and illustration.

If we, as adult readers, do not first engage our own imaginations in the story and the consequent questions suggested by the book, then we will struggle to share the kind of questions that will allow the children’s curiosity to unfold as they build on fantastical, scientific, or any other knowledge-seeking opportunities they develop for themselves. Questioning that leads to thinking and idea formation and sharing, requires deep exploration of possibilities from children. Such opportunities get lost if books are used for comprehension skills alone.

“The dragon is different, he is not a real dragon, he is just a paper dragon.”

“The paper dragon has sharp teeth!”

In her reflection, Nolu said she felt frustrated because she knew there was something she could have asked them at that point that would have developed the story of the dragon and allowed them to think together… but in the moment, she somehow could not work out how to do it…

So, when the PRAESA team met the following day, they addressed Nolu’s desire to unpack the ‘what if’ aspect of the dragon story together.

The following is an outline of our combined thinking: 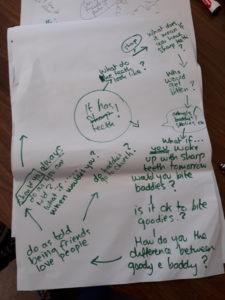 We started with the child’s exclamation that the dragon had sharp teeth.

How could we have followed up this statement, which had so obviously grabbed the attention of the children who, Nolu told us, had started to pull dragon faces?

Maybe with the response: ‘What would it mean if the dragon has sharp teeth?’

‘Do they have to be used for something?’

And the ‘what if’ … ‘what if’ YOU woke up tomorrow with a mouth full of very sharp teeth?

Would you want to bite someone? Who, and why?

Would you bite baddies? How would you know who was good or bad?

How do we know what is good or bad behaviour, and who decides?

What if people thought YOU were a baddie because you were biting bad guys?

What if you bit someone who looked bad but they were actually good?

How do we know when someone is good?

What if the dragon was only doing what his mom said to do because she told him to go and bite some baddies?

Is doing as you are told always the right thing to do? What if someone told you to do something you didn’t want to do, like…..?

As we began to think about these ‘what if’s’, new stories began to unfold in our imaginations. We had become dragons, bad dragons, conflicted dragons, obedient dragons, dragons fighting the isolation that our sharp teeth created. The same happens with children; after sharing the dragon story with them we have seen many dragons emerge in their play. Some dragons are scary, some have babies, some are babies. The new stories we have observed, listened to and written down for them, come from the ‘what if’s’. The story and the dialogue created through questioning, wondering and playing helps us examine possibilities and make new choices.

And in the exploration of ‘what if’, we also move towards possibilities for insight, understanding and empathy; we transfer from what “others” think, do, say or believe to include our own “self”: what if it was ME! What would I think, say and do?