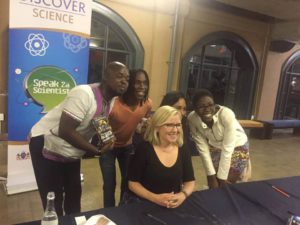 PRAESA has published with Jacana Media the isiXhosa and isiZulu versions of George’s Secret Key to the Universe, translated by Xolisa Guzula (isiXhosa) and Phiwayinkosi Mbuyazi (isiZulu).

Author Lucy Hawking visited South Africa in October to highlight the importance of getting young people excited about science through stories.

With generous support from PEN International and PEN SA, PRAESA initiated this translation project as part of our ongoing work to help ensure children have access to relevant and interesting reading materials in African languages and English.

Ten years after George’s Secret Key to the Universe – by Lucy and her father Stephen Hawking – was first published in English, this is the first time children and the adults who read with them will have a story to stimulate curiosity and interest in science available in isiZulu and isiXhosa.

The book inspires its readers about the foundations of astronomy, astrophysics, cosmology and other principles that govern our universe. It is the story of George, who’s taken through the vastness of space by a scientist, his daughter, and their super-computer named Cosmos to fight the forces of evil, using scientific information, facts and theories they learn along the way. It starts by describing black holes, atoms, stars, planets and their moons.

It has humorous illustrations and interesting facts about the different references to universal objects, including a picture of Mars with its Moons.