PRAESA literacy mentor Sive Mbolekwa and Sara Stanley, who works in early childhood projects for the development of literacy and imaginative Storyplay with PRAESA, have a thought-provoking session with classroom dragons over two days in Cape Town in October… 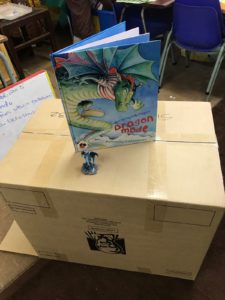 Sive read the story “Dragon mode” to the children for the first time. The children were excited and attentive and organised themselves to view the book. Children pointed to the pictures with comments about what was happening and there was excited chatter and exclamations at various points of the book.

After the story was finished, Sive introduced a small model dragon and asked the children where they thought he could live instead of in the house. The class teacher scribed the children’s ideas and they spelled out the words for the teacher while she wrote in partnership with their sounds. It was as if teacher and child were solving a problem together and the process of transforming spoken word to print was exciting to watch. 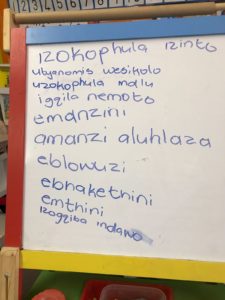 Why did the boy turn into a dragon? ‘It was angry because of school. It did not want to go to school.’

Sive led a short discussion asking the children why the dragon was so angry before we moved into Storyplaying with children exploring small world and role play, dragon den building, construction and emergent reading and writing.

A cardboard box became a dragon house/mountain and the children fetched scissors, tape and glue paints and confidently worked together to decorate the box. They created beautiful drawings and attached them with tape and glue to the outside of the box. 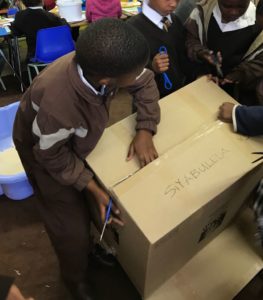 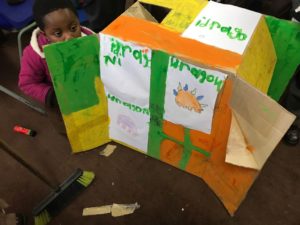 The fantasy corner began its transformation into a dragon’s den. The children spent considerable time working together to hang and drape fabric while others cooked food for the dragon. 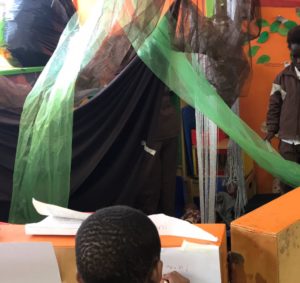 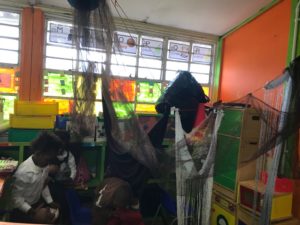 On the paper taped to the walls of the den more pictures of the dragon began to appear. Sive asked one of the artists whether she would like him to write down the story of her dragon but she replied “not until the dragon is finished.” A few minutes later the drawing was complete and its story was ready to be transcribed. The storyteller was animated in the telling, pausing to allow Sive time to write, pulling dragon faces and roaring. 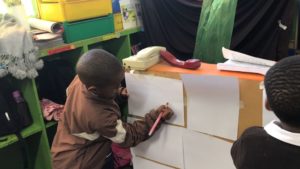 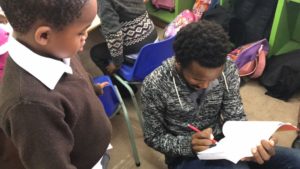 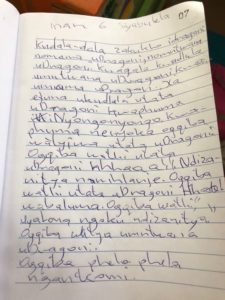 Sive was able to collect more stories as the children played in the small world dragon environment and as they made little dragons from playdough. These tiny dough dragons were taken by the children to the painted house where they were played with. 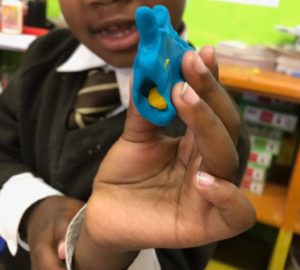 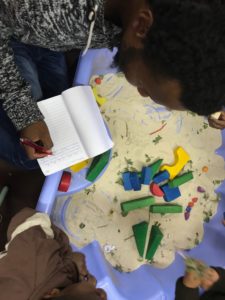 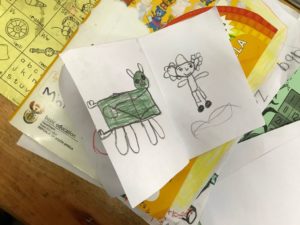 As we neared tidy-up time, we asked the teacher what she felt the children had covered from the curriculum. She spread her arms wide and exclaimed “ All of this, look! They have done home language, maths, cutting and painting, sticking, playdough and building, spelling, writing and reading. All with ONE STORY.”

• Look out for our next blog, “Think of where a dragon might like to fly to”, to find out what happened the following day…