“Chairs, chairs for sale” – the golden nugget of the day

In our Storyplay work, we try to create respectful spaces for children to be curious and imaginative learners. We’ve found this process to be extraordinarily enriching for enabling central aspects of language and literacy learning to emerge. These aspects are often “invisible” and not easily measurable. For instance, research tells us that children with rich oral language comprehend better – such oral language develops through stories, play and related dialogues.

Here, early childhood specialist Nadia Lubowski, who co-ordinates PRAESA’s Storyplay initiatives, and Nolubabalo Mbotshwa, PRAESA’s early childhood language and literacy mentor, tell of their experiences as taxis gripped the imagination of children they were with in Philippi recently…

We’ve been doing Storyplay at Simunye (a small preschool in Philippi, Cape Town) for two months. In the past few weeks we started to notice that the children love playing “taxi”. They mention it often while talking to one another. We thought about what story we could read to them that would tie in with their interest in taxi’s and Three Friends and a Taxi, written by Maryanne Bester, came to mind. We were excited to start Storyplay using this story as a stimulus. (Watch here!)

A week went by…

By this point, we had read Three Friends and a Taxi a few times (in isiXhosa) to the children, each time setting up different activities relating to the story for them to play with. With Storyplay, it is important to provide different materials and activities to allow the children to extend a story into their own play, in the way that they would like to enact it.

As expected, a “taxi” became the focus of the play. It was simply divine to see how the children direct their own learning, providing us with numerous opportunities to offer activities to incorporate literacy into their play. We started making number plates. The children decided what letters and numbers should go on their taxi’s number plates. The photo below illustrates what the adult was asked to write. 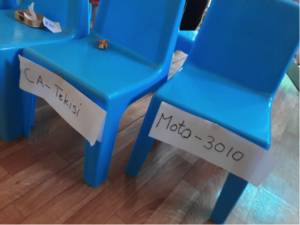 Making signs for roads, street signs, and directions all became part of our play. The children are three and four years old, which meant that everything we wrote and drew together were beautiful little attempts at writing, predominantly consisting of “mark making”.

Chuma pointed to a word on the car and asked what it said. The word he pointed at was ‘Fiat’ and we explained that it is the model of the car. We told them that we have different car models; we have Mazda, Golf, Polo, Toyota and others. Mivuyo said, ‘there’s also a vroom-paaa (a slang word for Golf 6). On our writing table were paper and crayons, and Lumko asked us to write some numbers for him to copy. We asked the children what numbers they wanted and wrote them on a piece of paper and put the paper in the middle of the table for them all to see. 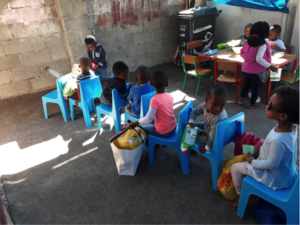 During the children’s play one week, the taxi always stopped at Shoprite. This gave us the idea to set up a small shop. We made a table, built a small shelf and stacked a few recycled boxes and containers to provide products and contents for the shop. We made a big sign saying ‘Shoprite’ and equipped the shop with shopping bags.

The children began buying at the shop. In the previous week we had also made money, as children needed to have money to be able to travel in the taxi. A big part of the story Three Friends and a Taxi is about the three characters, the sheep, the goat and the dog, giving the right amount of money to be able to get into a taxi. When the children wanted to buy at the shop, they needed money…

On the other side of the play area, we made a writing table for the children to make money. We included little blank booklets (made from scrap paper), pens, and a few pairs of scissors. Above the table we hung a sign that said ‘Capitec Bank’. The children could make and design their own money. 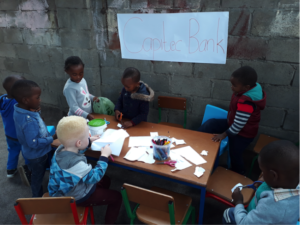 Inside the classroom, during the past two weeks, we had elaborated on our writing wall (which is a small area on the wall where we expand on the concepts from the story that we are learning about). Photographs of a taxi, beaches, villages and shops, including the written names of the places and items. We added Shoprite and Checkers signs. We stuck copies of money on the wall, all R10 notes, showing the back and front of the money.

The little booklets at the bank were very popular. The children loved writing on these to use as money to buy their items at the shop, or to go travelling in a taxi.

Suddenly, on his own, three-year-old Samkele started stacking a few plastic chairs. He moved them to an open space and started selling his chairs.

“Izitulo, izitulo, ndithengisa izitulo,” he shouted (chairs, chairs for sale. Chairs, chairs for sale). He was asking R12 per chair. One boy immediately came from the bank writing table and gave him some money and Samkele gave him a chair. Samkele continued shouting out that his chairs were for sale. Another boy came and bought a chair. Soon he had increased his price per chair to R20. The high quality play of the whole interaction was amazing to see; the boys drew/created their money first, then brought it to Samkele to buy the chairs, and Samkele put it in his pocket in such an earnest and serious manner. They were playing real life.

Interest in the chairs began to dwindle. Samkele then decided that he was going to make a car with the chairs he had collected. He built a car by putting two chairs behind one another. The girls immediately got on, and began driving in their car. Slowly, interest in playing with the car increased, another chair was added and the play continued.

Samkele switched his attention again as the chairs regained popularity. He could see that his friends were interested in the chairs, so he packed up the taxi, stacked the chairs and eagerly started selling them again. R20 a piece. He is an entrepreneur, enacting things he had observed and using his imagination to turn this into play that he was clearly enjoying.

Play, children’s play, is a world that you discover when you observe and pay attention. The learning that was taking place during the play was fascinating and almost tangible. Not being stopped by concerns over what is correct writing, children were practising how to write in their eagerness to create what they needed.  They could simply make their own money (and had the option to copy real money if they wanted to by using the examples on the writing wall). They were learning the concept of buying; they were learning to interact socially. The uses for print were visible for them throughout their play. This creates awareness in them of the importance of learning to read and write. All the learning and play that was taking place was inspired by the story Three Friends and a Taxi that we had been reading with them.