Language and literacy learning during early childhood, is an integrated process of storying through play and exploration. Closely observing young children’s experiences, offers adults contextual understanding which enables them to meet early learning needs in holistic ways. In the first of two pieces, Playing Freya, Nadia Lubowski reflects on her little son’s pretend play with a doll and how she and other adults engaged thoughtfully with him to support his efforts.

In the second, Anton Lucien’s first story, Nadia describes a literacy event, in which he comes to dictate his very first story, which she writes down for him. Such small stories, are what drive language and literacy development and learning, though in the busy-ness of home and school life, their significance can be underestimated, or ignored. 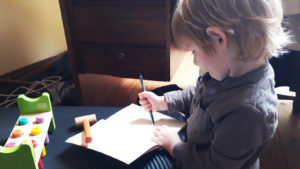 I got home from work, and sat down on the carpet to be with my children are raising multilingually. Their father speaks to them in English, I in German, and their Nanny in isiXhosa.

They were playing around me, and I was in bliss. My son, Anton Lucien, aged two and a half, said something amusing that I wanted to document, so I took out my book and started writing it down (I have a little book where I record some of the things he says). He watched me as I wrote and wanted to write in the book too. I asked him if I could give him his own book. He said ‘yes’. I proceeded to fetch him a little notebook. I often allow him to write where I am writing, but this time decided maybe I should encourage his own writing in his own specific book.

(This is the hungry caterpillar. It is eating a cucumber. Then sleeping. Then eating an apple and fish. Not sleeping in box.) 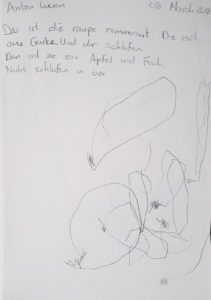 He drew a picture and told me the story of his picture. We were having a literacy moment together; it is one of many moments I will continue capturing and documenting to understand how his understanding of speaking, reading and writing unfold together. At one level, it feels such a simple process where I have been modeling writing and he has become interested.  Yet I know that this moment is one of so many where he has been observing me closely and gradually participating in the reading and writing I do in different ways.

At another level it is also interesting from a learning perspective to notice how children and adults draw from different aspects of our lives to compile experiences and stories. We had been reading Eric Carle’s classic, The Hungry Caterpillar together lately. It’s a book he is very fond of. We have an English and a German copy. His story that we documented was evidently influenced by the Hungry Caterpillar as well as his real-life experiences.

These moments are both incredibly precious and informative for understanding how our children become literate. They imitate and copy what they see and observe, and they draw from real-life experiences to structure their thinking to enable them to develop necessary skills.

Today, it seemed to all came together when I captured his story. After we had completed writing it down, I read it back to him. He seemed genuinely pleased. He had a deeply satisfied expression on his face, and I think it was because I read to him exactly what he had said. His story was documented in the way he told it. He saw that what he drew can be spoken about, that what he said I could write down, and we could read it together again and again Nothing more happened, he closed the book and ran off to fetch something else to play with.

As a parent and an early childhood specialist, I cannot help but get exceptionally excited about this fascinating journey of becoming a reader and a writer that we have embarked on. To watch his interest in drawing, talking about his drawings, and now writing things down too; it’s a whole new chapter of his development to enjoy. 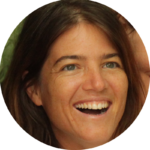 Nadia Lubowski  has been passionate about the early years since she was very young. As well as co-ordinating Storyplay, she enjoys being the mother of two little ones immensely, especially observing their growing understanding of the world through the various languages they are exploring.