A story worth telling…

If there ever was a golden heart, Beauty Bokwani has it. She started Zoe’s Educare two years ago, with the few resources she had. Thirty-seven children, aged from one to five years old attend her small space in Belhar. Then, every Saturday she hosts a group of 40 young adults, in an attempt to keep them off the streets and away from drug lords and gangsterism.

When I asked her about the youth group, she told me “season time” is coming up, so she will open her doors to the youth group on Friday afternoons too. I was curious about what she meant by “season time”. She told me a horrific fact: during “season time” children are recruited for gangs and to sell drugs. The way it works is that drug lords start giving drugs away for free during this time, and children will often take them, sometimes knowingly and sometimes unknowingly. People are happy, it is the end of the year, families get bonuses, it’s Christmas coming up, they start drinking more… The children observe the adults drinking and will sometimes take sips of beer or other alcohol while no one notices. Once tipsy, they are offered free drugs. They are lured to taste… “Come on, try a little, it tastes so good”… Before the children are even aware of what they have been offered, they are hooked and need more fixes. The drug lords then use these addicted children to sell the drugs at school to get more children hooked…

Beauty is passionate about helping the young people in her area. She learnt the technique of ‘life writing’ from Dawn Garisch, which helped her tremendously in her personal life journey. Now she has started using this technique with her youth group. She explained how it is transforming the way the youth group operates, and how these youngsters have become keen readers and writers. She says she could never have done all this work if it wasn’t for the life-changing experience of the writing course.

“Most of the young adults who attend my youth group… do not and cannot speak about things, especially when it is painful. We as humans want to push away the pain in your subconscious, we want to block it out. So I decided to do life writing with them. When we are in a group… I ask the children to close their eyes, and then go into a room, or a place, and ask them what is going on, what do you see… and then I ask them to write down what they saw.”

“I consider myself a storyteller,” she says. She does not have access to many storybooks to read to the children, so she writes some stories herself. Sometimes she tells stories and sometimes she writes them down and then asks the children to annotate them and draw pictures to illustrate the story for her. It was on the life-writing course that she learnt to make up her own stories.

She says the local library is not always open, in fact it is often closed.

She was so grateful for the books we gave her and especially that we gave her the books in three languages. “My parents could not afford to send me to an isiXhosa school because it was in another province, but because I could speak Afrikaans I was able to go to the local Afrikaans school. Other kids that grew up with me, they could not speak other languages. I also learned to speak English. In my club it is very important to me that we speak and learn more languages because I want them to be proud of themselves and who they are… and respect other cultures and languages. I want to teach them that you are not born with only one language, you can learn other languages. You then don’t have any excuse when you want to apply for a good job, because then no one can tell you are not good enough, just because you don’t speak the right language.”

I was blown away by Beauty’s passion for and dedication to all the young adults in her group. 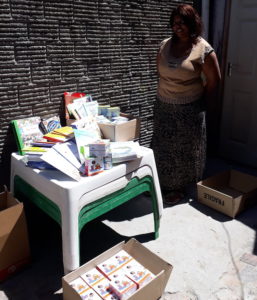 When we went to give the little children their books, the 4-5-year-olds were paging through torn magazines. It was evidently the only reading material they had. When I handed them the books, they were ecstatic. First they were unsure what it was, but as they unpacked the little boxes and started paging through the books they got more and more excited. The mere site of a pair of shoes was worth exclaiming. The children were tapping each other, showing their friends the pictures they were seeing, others were simply fascinated by unpacking, stacking and repacking the books, over and over. For the period I was there, they were so absorbed in their box of books they noticed little else.

As I walked away, my heart broke into a million pieces. Zoe’s Educare, a small beacon of hope. Time and again I visit these kinds of centres. The children have so little – broken windows, leaking roofs, cold floors, very few resources. In their personal lives, many of them also endure extreme hardship. Yet – you give them a book, and they are smiling from ear to ear. Their excitement is tangible and in that moment, nothing else matters. 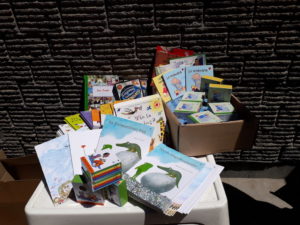 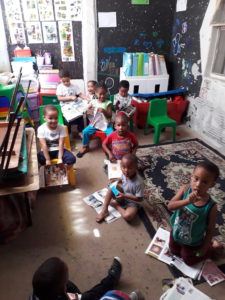